Taapsee Pannu Is The Most Versatile Actress, Proved With ‘Haseen Dillruba’

Taapsee’s career graph in Bollywood is rising with the release of every movie. Taapsee Pannu is doing characters that are versatile and all different from the previous one. In the recently released Netflix’s ‘Haseen Dillruba’ Taapsee Pannu is showing yet another grey and mysterious shade.

Surprisingly, she adapts the character so well that she seems to be a perfect cast for the role. Here we have created the list of her films in Bollywood that will clear you how versatile Taapsee Pannu is with her selection of roles in movies.

Before coming to the list, let me tell you an amazing trivia about the actress. The rough and tough actress in Bollywood has come from South movies where she was getting roles and appreciated for her queasiness and beauty.

Let’s talk about the shady character of Taapsee Pannu in ‘Haseen Dillruba’. The actress owns a stellar filmography with all different shades of characters. She played the bold Bhabhi character named ‘Rani’ who is the prime suspect of the murder of her husband.

With the recent release, Thappad will surely become one of the best movies in her Bollywood career. She plays the role of a caring housewife who gets a slap from her husband and then went to court for a divorce. She is receiving a lot of praise for portraying such a character on screen.

If you remember then Taapsee was also the part of Varun Dhawan starrer slapstick comedy Judwaa 2. She was playing the second lead actress along with Jacqueline Fernandez. She looks cute, bubbly, bold, and beautiful in every frame of the film. Her role in the movie is proof that she can fit into anything.

The suspense thriller Badla casts Amitabh Bachchan and Taapsee Pannu in the lead role. She looks fabulous in the movie and matching the temperament of Big B in each scene. Badla movie is soon to be a big cult classic in Bollywood because of its gripping storytelling.

Last year, she was featured in the movie Saand Ki Aankh where she played the character of 80 years old lady. Taapsee was seen speaking Haryanvi and shooting bullets along with Bhoomi Pednekar. Just imagine the skills of an actor who can impress you by portraying 80 years old character in the movie. 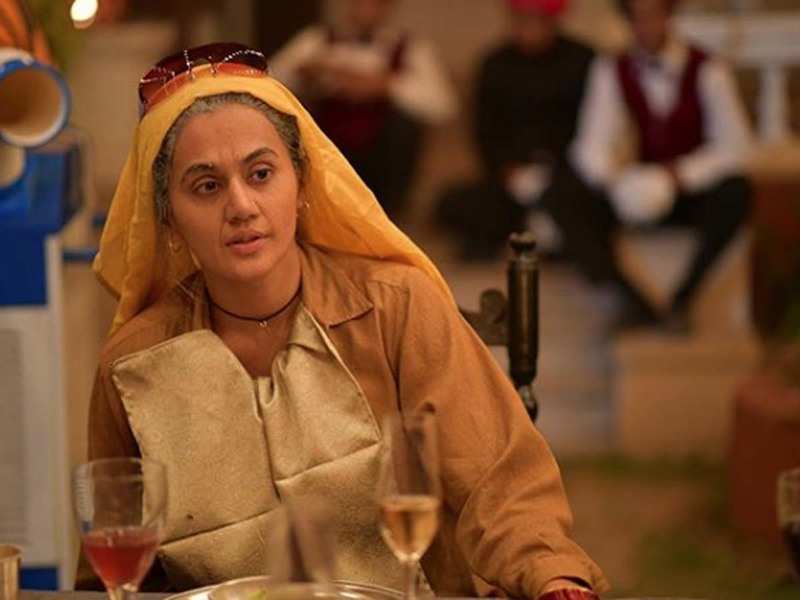 Remember the movie Pink? Well, most of the work was done by Amitabh Bachchan in the movie. However, all three girls have impressed the audience in the same way. The character played by Taapsee was bold and confident in the movie, all different from what she used to play before.

Game Over was a movie about a gamer having mental issues. Taapsee portrays the horror and suspense of the character beautifully on camera. The movie was well appreciated by the critics, and seriously there’s nothing more in the movie besides the awesome performance by Taapsee Pannu.

Manmarziyaan is one of my favorite movies I have ever watched in Bollywood. The songs of the movie are melody, characters are remarkable. And not to talk about Rumi and her adventures. Taapsee was seen the movie like never before, she is firey, she is bold, and she is RUMI.

If you don’t know then let me clear you that Naam Shabana is the spin-off of Akshay Kumar’s starrer Baby. Taapsee was also seen in Baby portraying the same character as Shabana. She played the role of a spy who is rough, tough, and sharp.

Mulk was a gripping story from Anubhav Sinha. It was the story of a Muslim family who tries to reclaim its honor after a family member involved in terrorism. Taapsee played the role of confident and bold lawyer Aarti Malhotra.

Soorma was the biopic of Hockey star Sandeep Sharma and his comeback in the Indian Hockey team. Taapsee essayed the role of Harpreet Kaur who is a sport-person in the movie. The movie was appreciated by fans as well as critics.

Chasme Baddor is a comedy movie directed by David Dhawan. The movie featured Ali Zafar opposite Taapsee Pannu. She was a funny, open-minded, and town girl in the movie. Taapsee has shown her versatility through her movies.