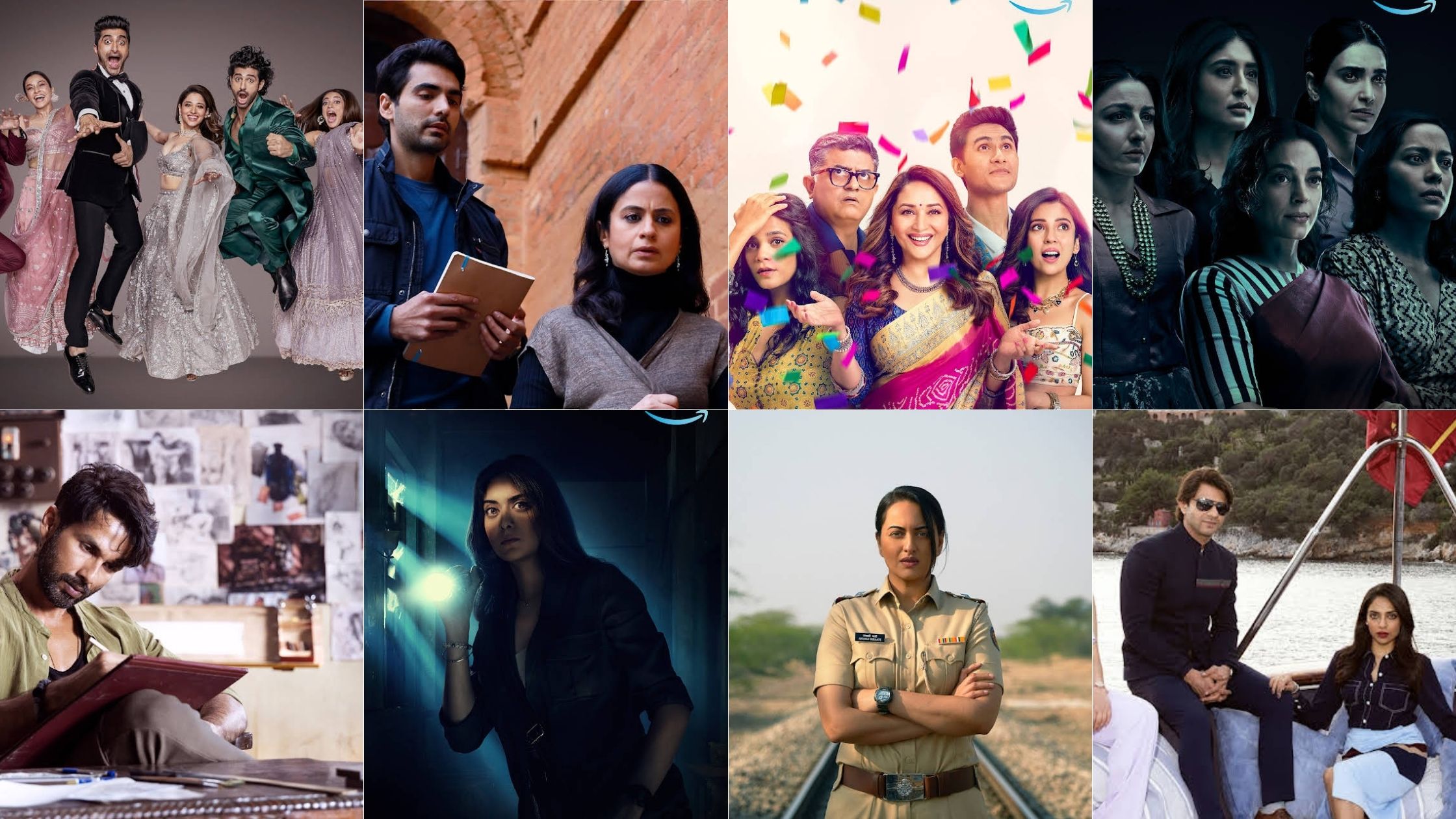 Story: A small-time artist working out of his grandfather’s printing press has designed the ultimate con job – a crime uniquely suited to him – and gets pulled into the murky, high stakes world of all that it demands. A fiery, unorthodox task force officer has made it his mission to rid the country of the menace this poses in this fast-paced, edgy one-of-a-kind thriller.

Story: A new series from the house of Raj & DK.

Story: Set in a newly independent India, Jubilee is a fictional period drama that unveils the stories and dreams that gave birth to Bollywood, as we know it.

Story: A young, troubled, female private investigator gets thrown into a world, where she has to fathom the unfathomable and find her own self.

Story: A light-hearted family comedy about a quirky but lovable joint family that is always at loggerheads with each other.

Story: A neo-noir series about a man who reluctantly returns to his hometown where he not only battles his past demons, but also gets drawn into an even bigger cesspool of smoke and mirrors and must now prove his innocence.

Story: In this supernatural horror, possessed inanimate objects wreak havoc on the lives of people who commit deadly sins.

Story: Braving the unknown, three generations of women from the same family set off on an epic road trip.

Story: An investigation into a simple missing persons case unravels and rips the intricate social fabric of a small town.

Story: A dramatic noir thriller about the murder of a beautiful young girl, an unrelenting obsessed cop, a novelist captivated by her grace and an opportunistic news editor.

Story: The absolute powerhouse of talent, Arya, in India’s first show based on the graphic novel, the Village

Story: The Chennai chapter of the widely loved US original anthology series, Modern Love Chennai explores six diverse yet universal stories of different facets, shades and moods of love, all set in the city’s many unique milieus.

Story: The Hyderabad chapter of the widely loved US original anthology series, Modern Love Hyderabad explores six diverse yet universal stories of different facets, shades and moods of love, all set in the city’s many unique milieus.

Story: The lives of five women intersect in unexpected ways when an unforeseen event unravels the façade of their lives.

16. Breathe Into The Shadows Season 2

Story: J’s existence and ideology re-emerge as he sets out to finish what he started leading Avinash to confront his merging dual-identity. Kabir Sawant must now fight the battle of his life as he protects the society that has become a victim in the endgame of this crazed saga.

Story: The wedding planning team is back to plan new weddings, face fresh challenges and in the process, chart the journey of their own lives.

Story: The four girls are coming back to live, love, blunder and discover what really makes them tick through friendship.

Story: The rivalry between Kaleen Bhaiyaa and Guddu only grows more intense from here.

Story: Hathi Ram faces grave mortal dangers in a new pursuit that takes him back to the netherworld.

Story: Nine months later, the crew at Bombay General Hospital is back doing what they do best – saving lives. This season our doctors and residents at BGH grapple with an unprecedented natural calamity that brings the city to a standstill, whilst also fighting their own personal battles.

Story: Srikant Tiwari sets off on another roller coaster ride, trying to balance life as a common man and a top-secret agent battling terrorists, rebels and moral dilemmas.

Story: An engineering graduate, Abhishek, is unable to find a job of his caliber. So, he ends up working for a panchayat in a remote Indian village and deals with several mundane challenges. As Abhishek settles, the village sees the rise of an opponent against Pradhan Ji and village politics of Phulera heats up.

Story: A serial killer drama set in a small town, the show follows the investigations of a female inspector into a crime that shakes her core.

Story: In his quest to clean the mean streets of Bombay from the rise of organised crime in post-Independence India, an honest cop puts everything on the line including the thing he wants to protect the most, his family.

Story: A coming of age series that delves into the lives of a close-knit group of seven childhood friends, trying to steer their way through adulthood.

Story: A supernatural thriller set in an elite boarding school which hides a secret so dark and dreadful, it will shake the very foundations of the school and the lives of everyone connected to it. Production Company: Emmay Entertainment

Story – A fictional account of two warring coaching institutes, and the effect it has on a group of young students who are preparing for their competitive exams, with dreams in their eyes and expectation of their families on their back.

29. Dancing On The Grave Web Series

Story: A true crime investigative series that tells the story of a sensational crime with access to exclusive interviews, shocking footage and the perpetrator himself.

Story: A warm, funny story set in Baroda about a loving mother who unwittingly becomes a hurdle to her son’s marriage plans and contests societal norms.