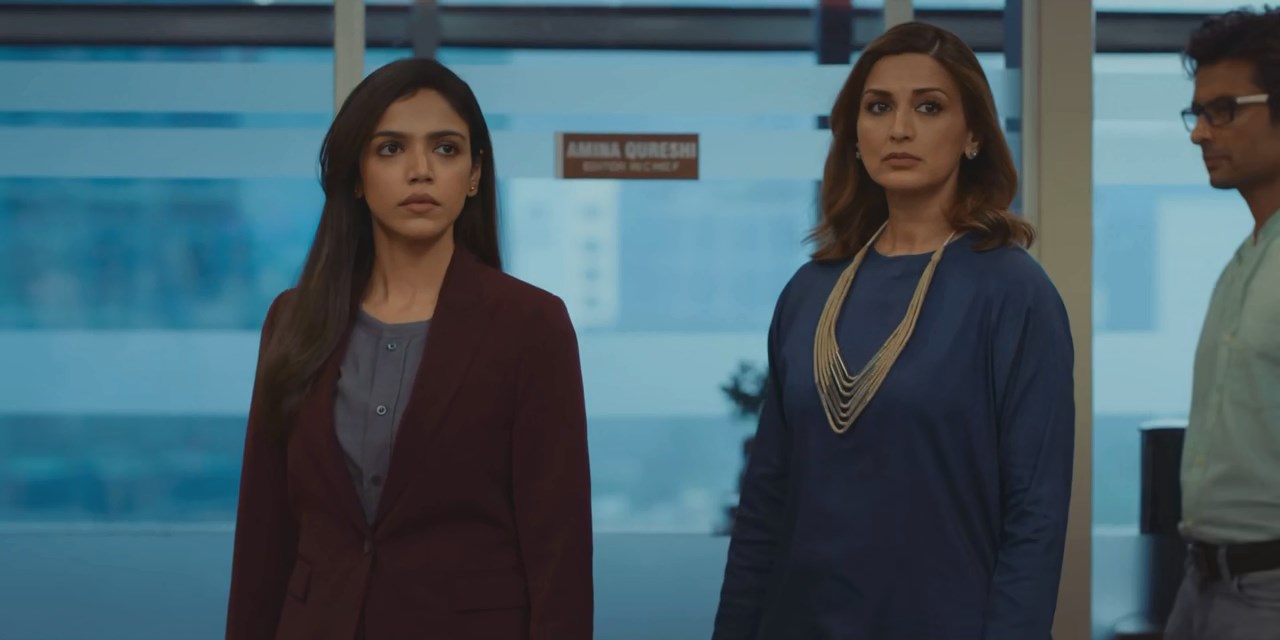 The Broken News Web Series is a drama set in the backdrop of journalism. Critics and movie buffs have been pointing out that ‘The Broken News’ is a make it or break it web series for Zee5. The web series is an interesting watch with layered characters, dramatic twists, and engaging storylines.

The web series gives an in-depth look into the functioning of media houses and the politics that unfolds within them. Even though the story is fictional, you can guess the dramatic events and truth behind them as you watch the series.

There are good and bad both, but the bad makes the most noise and it entertains more. What happens when a few righteous ones take matters into their hands and decide to expose the evils is the show.

The Broken News Review: Presenting Newsroom Like Never Before

It has been seen that news agency representation in Bollywood dropped down to asking stupid questions for the sake of laughter. Rarely, we get to see an engaging story that matches the responsibility and accountability of a profession like journalism.

The Broken News manages to show the behind-the-scenes of making news with its characters. The screenplay of the web series is written by Sambit Mishra who gives a good insight into media houses like never before.

The majority of the series revolves around Sonali Bendre tries well to bring an authentic reflection of how a newsroom works and what goes into creating a story that you consume in a few minutes. Vinay Waikul manages to create a world almost away from the caricature and does create an impact.

Sonali Bendre makes her acting come back after almost a decade. But the actor still has her charm and the comfort she shared with the camera. While it isn’t a very big task for her to create this character, it is the emotional moment where Bendre shows she knows her job even after battling the lows of life.

Shriya Pilgaonkar manages to shine the brightest even when Jaideep Ahlawat is in the frame. Her character Radha is written as fierce and Shriya plays her with an attitude that is expected. She manages to make it her own and never makes it look like it’s borrowed.

Jaideep Ahlawat has the riskiest job as he is on the rim of becoming another caricature. The actor saves himself most of the time and brings the darkness into the show. The actor does it all quite effortlessly and shows you how talented he is.

The layering of the world doesn’t seem enough. While there is enough to be invested in the newsroom, these characters will finally go home after their working hours. There’s nothing to enhance the character’s emotional stakes which were necessary for the conflict.

The emotions their personal lives ride on are never explored enough. There is a girl avenging her murdered friend, a woman living a dual life while hiding her relationship, a man who was once righteous but now worships the devil, and a father craving the presence of his daughter. But none have been explored so we can invest much.

The show also talks about some points never to be mentioned again. Just a mention of the LGBTQ+ community doesn’t mean the representation is done right. A character is hinted to be gay and I hoped his struggles were also given importance. Also, how is Shriya’s character allowed to quit jobs without serving notice periods?

The Broken News is a good attempt at creating an intriguing story. Some flaws, but walk past them and you have a watch that won’t disappoint you.

We recommend you to watch The Broken News Web Series on the Zee5 OTT Platform.